NOTE: Apparently this was not automatically uploaded on monday the 25th as I had arranged and I can only put it down to me having installed the new IOS 10 beta and may have kinked up the posting. So apologied to Ms Peace and PanMacmillian. Without further ado… 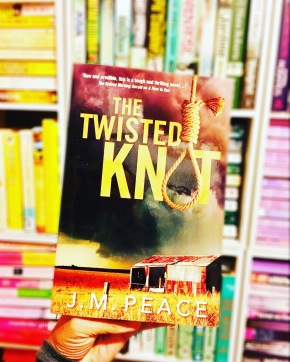 Available from: Macmillan & Booktopia to name a few places

Blurb:  A marked man. A damaged cop. A town full of secrets.

After her abduction and near death at the hands of a sadistic killer, Constable Samantha Willis is back in the uniform. Despite being on desk duty, rumours reach Sammi that Someone in Angel’s Crossing has been hurting little girls, and before long a mob is gathering to make sure justice is served.

So when a man is found hanging in his shed, the locals assume the pedophile has finally given in to his guilt. That is, until Sammi delves further into the death and uncovers a dark family secret, an unsolved crime and a town desperate for vengeance.

If you haven’t read the first book from JM Peace ‘A Time To Run’, never fear. Both books do just fine as stand alone’s despite having the same main characters.  The Twisted Knot is based on a highly contraversial topic, child sexual abuse.  Sammi, the female lead, is a small town cop who has recently returned back to the job after having a year off after being kidnapped by a serial killer in the first book.  She’s nervous but anxious to ‘get back to normal’, if there ever is such a thing.  The book itself, was very well written for most of the time, although for me, the first two – three chapters felt bogged down by more action and 2D conversation, than ‘action’.  However, once that inital stage of the book was over I was quite drawn into Sammi’s world.

It was always going to be a difficult topic for me to read, as the author is a police officer and I am a studying psychology student, and we have very different ways of thinking.  So there was a lot in there that I didn’t agree with, especially the ending in which a character mentions that things aren’t so black and white but instead grey, which is very very true, and yet in regards to “Pete the Pedo” it read very black and white, and it simply is not. So I struggled with that side of the story.

I also struggled with Sammi’s boyfriend, Gavin.  He really got under my skin and came across as quite childish at times. Whether or not the author planned for that, I’m not sure. But I found I disliked him a lot more, than anyone else.  The chapter I absolutely loved, was Sammi’s first visit to see ‘Pete the Pedo’s’ mother. It was so well written I actually had to go through and read it again!

While it was a contraverisal topic, and I didn’t agree with some of it, the author did do a good job of capturing people’s attiudes on offenders who sexually abuse children.  Much of the narrative that came from the characters, was identical to that which you see on social media, and other platforms. Whether or not you agree or have an opinion, factual or emotional, my overall take on this piece was of a high standard and I very much look forward to reading the next book by this author! I suggest you go pick up here two books, like I have and catch up before the next one’s released.

I gave this book:

Avid reader and 'collector' of books. I'm a prison psychologist and criminologist, so no surprise when I admit I have a particular like in true crime and psychological/police procedure thrillers and suspense books. View more posts